Tristan and Sebastian spent 4 days camping in the rouged terrain of the Bison Hillock last week with the mission to track and analyse bison behaviour.  Their patience and determination was fruitful and the multiple encounters delivered precious information about the hierarchy of two groups and the habits of three males which are roaming alone.

Cora and Tara joined the two for a couple of nights to help spy from the hides. Multiple pairs of eyes saw 17 individual bison in total and a matriarch, by the name of Mildred, was identified in one of the groups. The same group has 4 bison calves, one of which is no older than a month.

They all returned with more than 30 minutes of filmed footage which contained mating behaviour, the Flehmen response (when a male rises his upper lip to better smell the air) and the calves running around and seeming healthy. Photos and video content from strategically placed camera traps was also abundent. The camera traps picked up other animals as well as: a bear, martins and red deer.

One of the challenges expressed by Tristian was permanently keeping focus on the surroundings to increase bison sightings. Tristian learned that this time of year the entire group is hard to see as they are spread out on a wide area, with food more abundant but once the season changes they will become a more compact herd. 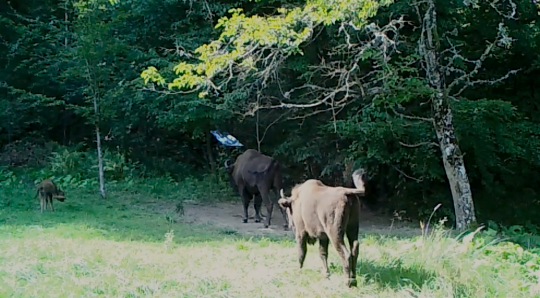 Sebastian found it easier than expected to find bison, as they followed the signals given by the three bison who have collars, but mostly tracked them by their fresh feces and tracks.

“The biggest reward was to see the animals so close and personal in their own habitat. Being out there, spending many nights in tents from the get go, that is also a reward in itself.” confirmed Sebastian and added that he just barely scratched the surface of a new animal, the bison behaviour, tracking and adding this new animal to his knowledge.

He also pointed out that this new terrain – deciduous mountainous terrain – offers some challenges as finding good water sources and appropriate camping sites are a bit difficult, but nonetheless it makes for a great learning experience. 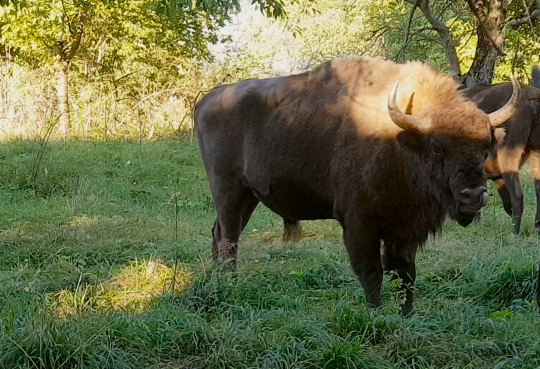 More nights and days will be spent camping, so stay tuned to find out the latest news about the Taskforce’s experience in the Bison Hillock